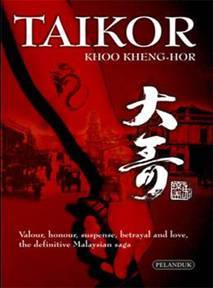 I have always searched for English fiction books written by Asian and local authors. One day, I can’t recall the exact date – maybe it was two years ago – I found Taikor by Khoo Kheng-Hor at one of the bookstores. Despite my busy schedule, I looked forward to reading the book, which I finished within a week.A historical saga, Taikor brings back the past for those who can still remember and for the young (like me) who wish to know how things used to be in the years between 1932 and 1982.

It certainly took me down memory lane to forgotten places. It also briefly explains the events leading to our country’s independence.Thus, it is very suitable for those who aren’t fond of reading long-winded history books but are looking for something where historical facts are built into the story as part of the saga.This is one of the very rare, well-written English works of fiction by a local author. No wonder it was nominated for the 2006 International IMPAC Dublin Literary Award.Briefly, the story begins in pre-war British-ruled Malaya and is about the life of a boy as he grows to manhood.

Ya Loong’s family migrates from South Thailand to Penang after his father passes away.After his mother remarries, the young Ya Loong is sent away by his stepfather to live with a relative in Shanghai. His life is somewhat changed by events in that war-torn city. Upon his return, he faces a difficult situation as he has to find a way to earn a living and survive the bloody days of Japanese occupation.After the war, he discovers his destiny by becoming a taikor – a term meaning “big brother” as accorded to a secret society’s chieftain – in Penang’s chaotic underworld.

But after Malaya becomes an independent sovereign country, for the sake of his family, the taikor breaks away from his past involvement in triad activities and begins a new life.The tale has very interesting plots and sub-plots that make it almost impossible or frustrating (as in my case) to put aside the book after you have started to read it. And, the author doesn’t try to impress anyone with bombastic English but writes in simple language.I found it a breeze to read the book and enjoyed every moment of it and can’t wait for the next book by the author.