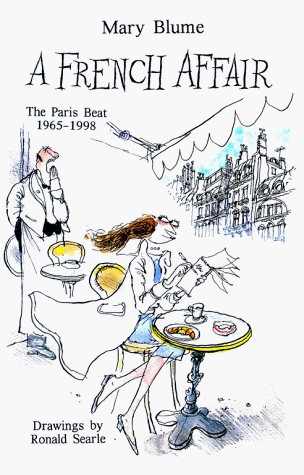 From Benjamin Franklin charming Louis XVI to Jackie Kennedy enchanting Charles de Gaulle, the two peoples have fascinated and repelled each other. Mary Blume has cultivated her own love affair with this often inscrutable land -- France. It is an affair that spans more than thirty years, from the time Mary Blume first came to Paris, beginning her renowned columns in the International Herald Tribune with a fine eye for the charms, and no aversion to skewering the pretensions, of her adopted home.

As with the best chronicles of a time and a place, the narrator begins to emerge through the text. Only Mary Blume could have written these essays. Hers is a unique voice that has won her a devoted audience who have turned religiously, over decades, to her weekend features.Quintessentially American, she has managed that fine trick of not assimilating, and yet coming to know, in the fullest sense, the place and the people in all their often sublime and sometimes ridiculous complexity.

In the pieces themselves, whether she turns her penetrating lens on Frenchemen or their money or their socks, whether a bearded lady or Simone de Beauvoir, street performers or members of the Academie Franaise, whether the newest chic potato or the eternally chic St. Germain de Pres, whether the events of May 68 or the last presidential elections, she sees what would pass unseen -- were she not there to notice it.In the simplest things, Mary Blume reveals the telling detail. In a pieceostensibly about cooking lessons given by two well-meaning aristocrats, she lays bare the acute French sense of class- in a deadpan explanation of the byzantine process of changing street names, she captures the Kafkaesque French bureaucracy- in looking at one beloved Left Bank bistro, she gives us the essence of every such restaurant- by describing the French art of window shopping, she gives us a reflection of how the French see themselves.

Whether plumbing the nuances of their language, their rites, rules, or rituals- whether looking at the Mona Lisa or the political arena, film-makers or winemakers, the places and personalities come alive with an uncanny ring of truth.Illustrated by Ronald Searle with the unique wit and delicacy for which he is world famous, A French Affair gives us not only a unique perspective on a time, a place, and a people, but a France that we can digest, distill, and revisit without ever leaving the comfort of home.